One of the things we think is unique about Science in the Parks is that it offers children a unique way to engage with scientific ideas.  We offer them the stuff and the space, and for the most part we let kids get their hands into the moving parts, simple patterns, and gooey messes, all on their own terms.  We try to make sure that the materials are available and that we allow children access to them, but we like to stay out of their way.  In fact, when I have staff and volunteers who are new to the program, I try to emphasize to them that we’re not there to be experts.  The primary job requirement is to play.  Fortunately, we find good people who can jump right into this whimsical and inquiring mode.  And, the parks are the perfect place for this: there’s lots of room, we can make a mess, and we more or less set up our own traveling carnival.

This is our last week of our official 2015 Science in the Parks tour, but it’s not the end of our summer.  We’re partnering with the Treehouse Museum in Ogden to develop activities with them, both this summer and possibly (hopefully!) into the future.  This is exciting because the Treehouse has been a leading example of how to offer space for children to wonder and explore.  Their trademark, “Step Into a Story,” describes everything they’re about.  Children, side-by-side with their grownups, get to step into different cultures, plays, art forms, time periods, characters, heroes, jobs, and other identities.  In short, they get to “try on” others’ perspectives and ideas.  It’s a skill that I think we could all use some practice.

Science in the Parks gets to bring some science to Treehouse, and we get to learn from Treehouse about their “step into” philosophy.  This opens up a new way to think about introducing young children to thinking about the natural world: How do we “step into science”?  In other words, how do we offer science to preschoolers so that children are true to themselves and so that the science is still real?

For us, we like to think of our early childhood colleagues as “scientists in waiting.”  This is a phrase borrowed from Rochel Gelman and her co-authors of Preschool Pathways to Science.  They make the point that anyone who has been to either Treehouse or Science in the Parks already knows: Children are not only naturally curious, but they already have ideas. It’s not as though they are “blank slates”.  They predict what will happen and they are surprised by funny outcomes.  They think about explanations for why things are happening.  They marvel at things they haven’t seen before.  And, probably best of all, they are curious and even brave.  They plunge their hands into slime, goo, jellies, foams and any other mess that their parents, unfortunately, shy away from.  In short, even if these kids are still thinking about the world through the beautiful eyes of a 4-year-old, they have core ideals of the most innovative scientists and engineers we know.

It turns out that science education research is quite clear that these attitudes are what we want to encourage in our proto-scientists.   The National Research Council even emphasizes science (and engineering) “practices” that we should foster in all education.  These go beyond just a scientific “method” and emphasize all of the tools that scientists use:*

There are important things to value in this list.  Asking questions and seeking explanation are, perhaps, at the core of who we are and what separates us from other species.  These traits are the very heart of both science and the arts.  But there’s more.  We communicate and we count.  We think through what’s in front of us and try to make a case for a decision — an argument.  Based on all the information (data) we have, we can imagine what could be causing something to happen — a model — and we can imagine what we’d like to investigate next to see if an explanation is right.  If you have the privilege of being an important grownup in a child’s life, you get to see these skills in them already.  Maybe our job is to make sure that we don’t squelch these and continue to encourage them.

But, I think it’s even more important to realize what is not on this list of important scientific practices.  Nowhere does it say anything about having the “right answers”.  It does not say anything about having facts at our fingertips.  And it certainly doesn’t say anything about what kinds of investigations or which explanations are important.  A child’s curiosity should be opened wide, just like a scientist’s.  The best scientists I know ask some of the most ridiculous questions and are entranced by what might seem like the simplest phenomena.  This is the way of thinking that we want to encourage children to “step into.”  Grownups would do well to step alongside children, maybe just slightly behind, letting the kids take the lead.  I know we could learn something from them.

*See this explanation from the National Science Teachers Association and this associated article by Rodger Bybee — the only academic article we know of that opens with, “This morning I watched Sesame Street.” 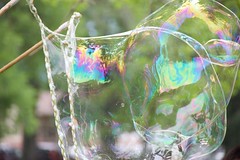